Tether (USDT) depegged in early November amid fear and uncertainty in the cryptocurrency market following the collapse of crypto exchange FTX. Concerns about tether’s fiat reserves have continued to haunt the top stablecoin as short sellers returned to test tether’s resolve once again in late 2022.

Why did tether short interest rise? Will tether depeg? Read on as we explore the subject.

Tether or USDT is a cryptocurrency pegged to the US dollar (USD) on a one-to-one basis. However, there have been several instances of depegging and the complete collapse of stablecoins.

The tether crypto is backed by fiat reserves. Its balances are updated and published on its website on a daily basis.

USDT is available across various blockchain networks, however, over 90% were issued on the Tron and Ethereum blockchains.

What is your sentiment on USDT/USD?

Give USDT/USD a try

Tether short interest: Why is USDT under attack? 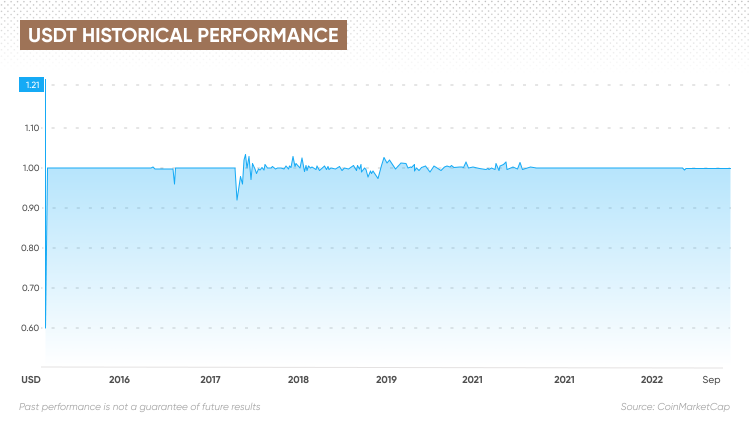 Tether is no stranger to depegging events and short seller interest. On 7 November 2022, USDT experienced a depegging event as the stablecoin fell to a low of $0.9755.

There were speculations in the market that FTX and its associate trading firm Alameda Research had a hand in the USDT depegging.

“Even amid all this and the near radio silence from FTX and Alameda, there was some on-chain activity spotted to show a potential Alameda play to depeg Tether (USDT) in order to make money back in other plays,” noted Bitcoin Magazine in an email newsletter.

“This is some of the most pressure the peg has faced since 2018. Tether has always been a scapegoat for critics outside the space but has yet to fail.”

Over the years, Tether has faced criticism for the lack of transparency of its fiat reserves. Most notably, the US Commodity Futures Trading Commission (CFTC) reported in October 2021 that USDT’s reserves were not “fully-backed” between 2016 and 2018.

The allegations have resulted in tether being constantly targeted by short sellers on existing concerns about the stablecoin’s reserve backing.

But how are traders shorting tether? According to Paolo Ardoino, chief technology officer at USDT issuer Tether Global, USDT/USD perpetuals, spot short selling and decentralised finance liquidity pool unbalancing were tools used by hedge funds to depeg USDT in June 2022 amid fear, uncertainty and doubt (FUD) following the collapse of the Terra ecosystem.

Ardoino added in a 27 June tweet that the rationale behind the attack on Tether were based on the claims that USDT was not 100% backed, had exposure to cash-strapped Chinese real estate assets and on suspicions that lenders were borrowing from Tether without over-collateralisation.

“To these funds (hedge funds shorting USDT in June 2022), Tether is considered to be a low-risk way to short the cryptocurrency markets that funds can easily explain to their investors. Since everyone knows USDT won’t increase exponentially in price, these funds believe they found a risk-free way to go short on crypto.

“Short interest from these funds has created an opportunity for traders who do not believe USDT will fail to step in and collect funding from the other side of this trade.”

Following Tether short interest news in November 2022, the stablecoin published a quarterly reserves report in a bid to quell any ongoing fear, uncertainty and doubt.

The stablecoin issuer had total assets of over $68.06bn, as of September end 2022, of which liquid assets like cash, cash equivalents and other short-term deposits made up 82% of total reserves.

Tether said US Treasury bills made up over 58% of its reserves in the report attested by US-based accounting firm BDO. Its total liabilities amounted to $67.81bn which accounted for issued stablecoins.

On 16 November, Tether published a press release denying it had any exposure to institutional crypto trading firm Genesis, which had suspended redemptions and new loan originations in its lending business following “abnormal withdrawal requests” from its client.

On 17 November, Tether assured the market that USDT based on the Solana network were redeemable despite crypto exchange Binance temporarily suspending USDT deposits on FTX-linked Solana.

“USDT issued on Solana is the same as USDT issued on any other chain. The token simply represents a claim to $1 of Tether’s reserves and collateral.”

When looking for Tether short interest predictions, it is important to remember that cryptocurrency markets are extremely volatile and forecasts can go wrong.

If you are considering trading cryptocurrencies, it is recommended that you always do your own research. Keep in mind that past performance is no guarantee of future returns. And never trade money that you cannot afford to lose.

There are currently no responses for this story.
Be the first to respond.